Materials seized from the suspects in the assassination of the President of Haiti, Jovenel Moise.
Photo: Etailove St-Val / Reuters

On June 20, 17 days before his assassination, an armed group attempted to carry out the kidnapping of the then-president of Haiti, Jovenel Moise, at Port-au-Prince airport, but a change in its schedule prevented the operation from being carried out. Outside.

The data emerge from the initial report prepared by the Haitian authorities, which the newspaper El Tiempo had access to, and in which the police proved their assumptions about the assassination: The assassination plan was premeditated by Colombian mercenaries, the participation of two American companies, and the complicity of the President’s security elements in the events, because when Moyes’ house was attacked, “the front door was open.”

According to the police, there was a six-man command, in which the late Colombian mercenaries Mauricio Javier Romero Medina and Doberni Cappador Giraldo participated, and they had a clear order to “assassinate the president and search for dollars”, which was in the agent’s room.

How did the events happen?

The report indicates that after analyzing the testimonies, this can be concluded The suspects allegedly knew they were going to kill the president.”

The day before the crime, retired Colombian captain Germain Alejandro Rivera Garcia, who had been appointed as the head of the operation, issued an order to “assassinate all the people in the house.” The leadership would have refused, because he supposedly traveled to Haiti “to look after the figures of national life and not to kill anyone.”

But Joseph-Felix Badiou, a former Justice Department official considered one of the intellectuals responsible for the murder, told them that in the president’s room were two briefcases and two boxes worth $45 million. Of this money, they would receive 18 million for “carrying out the action,” which would have prompted them to agree to commit the crime. They put a condition: “They only kill the president. No one else.”

To carry out the operation, CTU Security and Worldwide Capital, both based in the United States, invested $865,376, money that will also be recovered after the theft.

In the early morning of July 7, about 1:00 in the morning, the mercenaries arrived at Moyes’ private residence. They were organized into four groups and distributed in six trucks. According to investigations, between three and four Haitian policemen traveled in each vehicle.

In the first truck, there was a commando, baptized by the name Delta, in which were ex-military Dobernay Cappador and James Solajis, an American citizen of Haitian descent who could have turned himself in to the Haitian police authorities after the assassination.

And the text stated: “They subdued the personnel at the two entry barriers to the presidential house, and at each site were four men in military uniforms, and put them in the back of the trucks.”

The Delta group made their way to the chief’s room, while the rest remained on the first floor. They communicated through the radio. “They took the boxes, bags and suitcases into the driveway so that the group on the first floor could help cut the money and put it in the trucks,” the document says. Several members of the leadership were later arrested with crowds of $100 bills on them.

The newspaper did not mention in the report any details about the timing of Moss’ death. 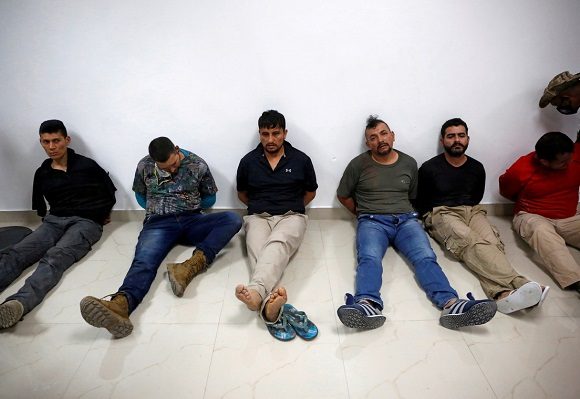 Police discovered that three days before the murder there was a meeting in the home of Wendell Cook Thilot, a judge of the Court of Cassation, the country’s highest judicial body, who is currently a fugitive from justice. Joseph-Felix Badiou, businessman Rudolph Jarre and former opposition senator John Joel Joseph, all wanted by the police, among others, participated.

According to the information, the leadership at that meeting was informed that after Moyes’ death, the judge would assume the presidency and that after the assassination they would be responsible for providing him protection.

He emphasized this by saying, “They were calm, and even sure that the Haitian authorities would protect them, because they were told in this way. That is why they did not flee the island.”

But upon leaving the house, the National Police killed several members of the leadership, including Duberney Capador. Colonel Rivera Garcia gave them the order to go to the Taiwanese embassy, ​​where at last no less than eleven members were arrested.

One thing that awaits clarification is the three-truck fire, since in addition to the loss of many evidence, such as the closed circuit video that was disrupted and extracted by a commando, there will also be “millions”. of dollars” they took out of the house.

(taken from RT in Spanish)