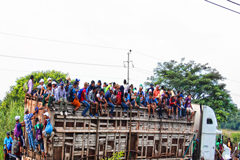 Central American migrants move by means of their access via Mexico to try to reach the United States borders. (IOM / Rafael Rodriguez)

Lack of jobs, poverty, inequality, population growth and vulnerability to climate change are among the main causes of mass migration in these countries. Among other measures, the development plan urges Mexico to increase its purchases of Central American goods to boost those economies.

“The causes of migration are structural and linked to development,” the Executive Secretary of the Economic Commission for Latin America and the Caribbean (ECLAC) said Friday during a meeting in which senior representatives of El Salvador, Guatemala and Honduras delivered. The Mexico Comprehensive Development Plan for Northern Central America and Southeast Mexico.

Alicia Barcena explained that the plan addresses the structural causes of irregular migration from the perspective of development and integration in the short and medium term, and that it includes a financing mechanism for the four countries. “It is a feasible plan and a potential plan for implementation,” he said.

The President of the Economic Commission for Latin America and the Caribbean stressed that the plan aims to change the migration narrative, linking it to sustainable development and peace, placing the dignity of the immigrant and human rights at the center with a focus on human security, and adopting a migration cycle approach. Includes origin, transit, destination and return.

He added that he is exploring regional synergies and possible solutions from integration.

In this context, he highlighted the importance of Mexico buying more products from the three Central American countries.

“There is very little trade between the three countries: El Salvador, Honduras and Guatemala with Mexico, and Mexico can be a great market for them,” he noted and suggested, for example, that the coffee that Mexicans consume in those countries be bought. Triangle, North Central America.

It is about creating this commercial space, promoting initiatives that attract economic investment, and private investment. He explained that trade is increasing and generating decent jobs, the ability to adapt to climate change, and that there is an integrative approach to the migration cycle.”

19 agencies of the United Nations system, as well as the governments of the four countries, participated in the development of the five-year strategy, which will cost about 40 thousand million dollars.

While presenting the plan, Parsena cited the root causes that lead to mass migration: insufficient growth with low productivity of economies, because they do not generate jobs; poverty and inequality; high population growth and rural backwardness; vulnerability to climate change; family reunification; He explained that violence “although it has decreased.”

Economic Commission for Latin America and the Caribbean’s forecast for this year relates to growth in the subregion; However, this growth will not translate into higher employment opportunities or lower poverty rates because part of the progress will be due to the financial transfers that governments make to the poorest populations to mitigate the impact of the COVID-19 pandemic.

Added to this assistance is an increase in remittances from the United States, where there is greater economic take-off and there have also been government support programs that favor immigrants.

Referring to the lack of work in the four Latin American countries, Barcena stressed that women and youth are the hardest hit. “Women suffer the most in terms of the unemployment rate, except for El Salvador, there are more men than women who do not work,” he added.

There is also a food security problem in the sub-region, he added, “which was exacerbated by the change in the rain regime and drought. Central America was one of the regions of the world most affected by food insecurity.”

The presentation ceremony for the plan was held at the headquarters of the Mexican Ministry of Foreign Affairs, in the Mexican capital, and was attended by the Vice President of El Salvador, Felix Oloa. First Lady of Honduras, Ana García de Hernández; Deputy Minister of Foreign Relations of Guatemala, Carlos Ramiro Martinez; and Undersecretary for Planning at Mexico’s Ministry of Welfare, Hugo Raul Bolin, are among other top officials.

25 people died in floods in India