Madrid, 12 May 2022. Telefónica accelerated its growth in the first quarter of 2022, a period in which it was able to increase revenue in all the markets in which it operates, in terms of reports, during which it earned a net profit of €706 million.

In the first three months of the year, the company also made progress in implementing its strategic plan, while achieving new milestones aimed at creating value. In this area, the closing of the acquisition of Oi’s mobile assets in Brazil stands out, which will generate synergies of approximately 1,000 million euros. Also marked were the agreements reached in Spain regarding LaLiga’s broadcasting rights, with a 15% reduction in net costs following the agreement with DAZN; network optimization in Germany; Advances in the process of creating fiber composites in Spain and the United Kingdom; Or the acquisition of the British company Incremental by Telefónica Tech, to which the purchase of BE-terna was later added.

“Telefónica’s strong start to the year under the scenario of inflationary tensions and geopolitical instability demonstrates the company’s strength in the face of the most negative situations. Once again, it has been confirmed that the Group’s strategic plan is correct and represents a valid and solid roadmap to be able to continue providing the best service to our customers” , confirms Jose Maria Alvarez Ballet, President of Telefónica.

“During the first quarter, we continued to implement our strategy aimed at creating value. The successful closure of the Oi operation in Brazil or the agreement signed with DAZN to acquire the rights to LaLiga confirms that Telefónica is never dependent on the implementation of its strategic plan,” emphasized the company’s CEO, Angel Villa. Telefónica’s Director General of Finance and Control and President of Latin America, Laura Abasolo, highlighted “a strong start to the year, with generalized organic growth and a strong generation of free cash flow”.

In this same context of compliance and implementation of the strategic plan, Telefónica has shown progress with regard to the digitization of the business model, whose operations are already digitized by 81%, with the aim of continuing to benefit from technology and efficiency to continue moving in this direction.

Revenue: growth in all countries

In terms of reports, revenue growth spread across all markets in which the group operates, with double-digit increases in Brazil (+18.1%) and Hispam (+10.9%), for a total of 9,410 million. Of that revenue, 73% actually comes from broadband connectivity and digital services, an increase of 2.1 percentage points over the same period in 2021.

For the first time in recent years, positive exchange rate development had a positive impact on both revenue and OIBDA in the same quarter, with a contribution of 242 million to sales and 95 million to operating income before amortization. 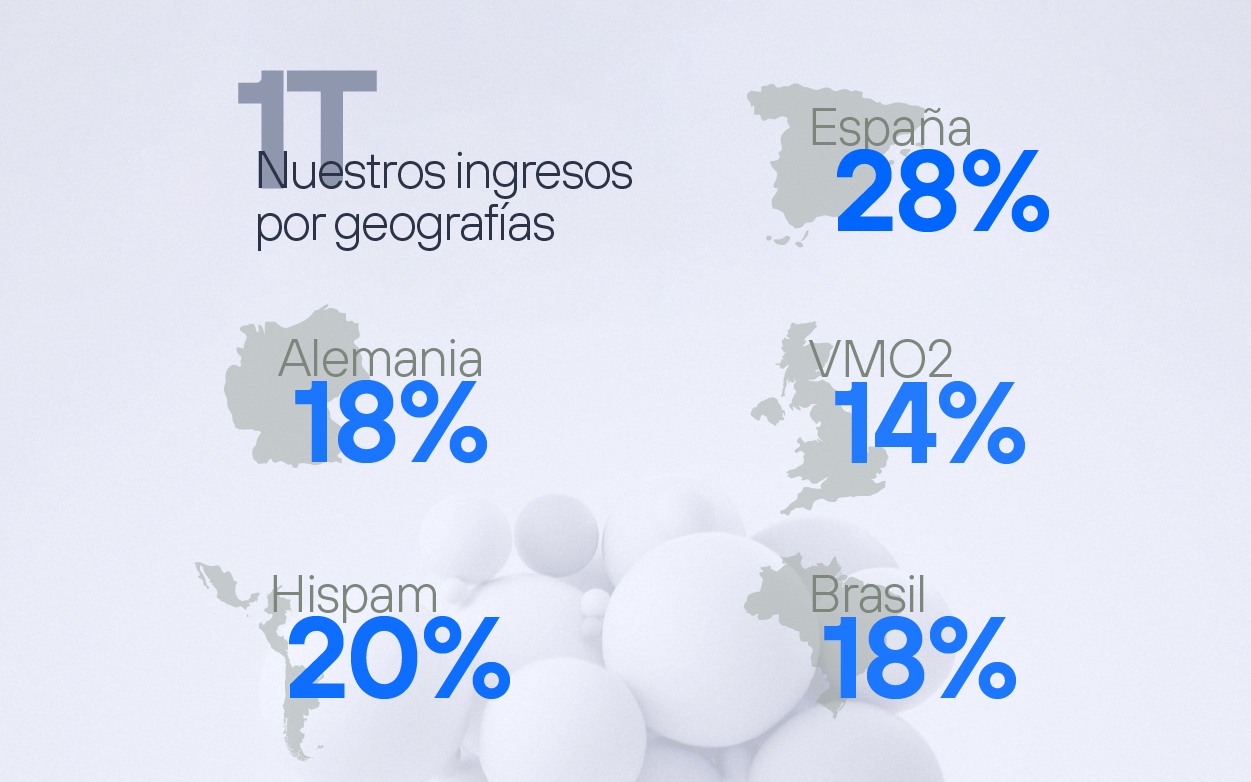 Both revenue growth and OIBDA are on track to meet the company’s financial targets for the year as a whole, which consist of achieving low single-digit growth in both divisions organically. The same is happening with the investment (CapEx) on sales, which is 12%, compared to the annual target of reaching 15%.

Telefónica Tech accelerated its growth in the first three months of 2022. Its revenue increased 80.6% over the same period the previous year, to €299 million, thanks to good performance across the board and integration of operations throughout 2021.

With respect to Telefonica Infra, this quarter the company made progress in building fiber compounds in Spain and the UK, held talks with potential investors, and closed the alliance with Pontegadea in Telxius, following the sale of a stake in KKR.

See also  How much does Meta pay for Mark Zuckerberg's security?

During the first three months of the year, Telefónica reported free cash generation of €513 million including leases, 15.5 times more than the first quarter of 2021 due to spectrum auctions conducted during the first months of last year.

At the end of the first quarter, Telefónica is in a strong financial position that allows it to face the current scenario of inflationary tensions and interest rate increases, a position that also benefits from efficiencies derived from the new business model. Despite inflationary pressures in all areas in which the company operates, both revenue and OIBDA have grown sequentially in each of them, and 80% of revenue includes mechanisms in the rates that protect against this effect. In addition, Telefónica has decades of experience in markets with high inflation rates.

At the end of the first quarter, the net financial debt was reduced to 27,453 million euros, which is 23.3% less than it was in March 2021. Of the total debt, more than 80% at a fixed rate, the company protects against it the possibility of increased financing costs, and the average life The debt is up to 12.9 years.

In addition, Telefónica has an important liquidity position, amounting to 22,302 million euros, covering maturities until 2024.

Telefónica Group’s reach base reached 368.3 million at the end of March, up 1.1% over the previous year. Fiber optic customers grew 20% and mobile contract customers grew 4.3% compared to March 2021.

The company continues to focus on fiber diffusion and the development of sustainable, open and virtual technologies. At the end of March, Telefónica maintained its leadership position with the number of real estate units passed using fibres, increasing its presence by 6%, to a total of 162.9 million homes passed, of which nearly 85 million are through the Telefónica network own.

In terms of 5G technology, Telefónica offers coverage in more than 400 British cities, about 250 German cities and 21 Brazilian cities, while in Spain it covers about 82% of the population. In addition, implementation of standalone 5G technology continues after the spectrum acquisition in Spain, the UK and Brazil in 2021.

ESG and Solidarity with Ukraine

Telefónica’s sustainability goals, integrated into the company’s business strategy and aligned with the UN Sustainable Development Goals, advanced the quarter with milestones such as the boost to the Innovation and Talent Hub through the opening of the new Campus de Universitas, Telefónica’s unwavering commitment to employability and digital training, as well as The three references in the WDA received in recognition of transparency in the management of information relating to company employees and the value chain.

Telefónica’s ESG goals are concrete. The company aims to achieve net zero emissions in 2040, with the intermediate goal of achieving this in the company’s main markets in 2025 (band 1 + 2), and being a zero waste company in 2030. It will also achieve 90-97% broad bank coverage Mobile range in rural Spain, Brazil and Germany in 2024; It has 33% female managers in 2024; eliminating the total salary gap in 2050. Also concrete is the target of financing over €10,000 million in the coming years under sustainability criteria; achieving gender parity in the main management bodies of the company in 2030; and maintaining a “zero tolerance” policy against corruption.

Telefónica and its foundation also demonstrated their solidarity with Ukraine this quarter by providing assistance to those who live in Ukraine, with people who have friends and relatives there and with all those who seek protection in other countries. The initiatives have been expressed through financial donations, free communication services (calls, roaming or SMS), and by employees, volunteers and organizations in the various countries in which the company operates.