Using a dark energy survey in Chile, researchers from the University of Washington DISCOVER Over six years a total of 815 objects outside Neptune. Of those 815 pieces, 461 are new and never seen before. The curiosity here is how they are grouped together, the series of groupings that occur when a large object or mass like a planet exerts a gravitational force on them. the problem? We don’t find what the gravitational force exerts.

Dark Energy Survey (DES) Its main goal is to understand the dark energy that drives the accelerating expansion of the universe. It is generally used for large-scale observations in the depths of the universe, but researcher Pedro Bernardinelli and his team decided to look more closely, at the edge of our solar system.

Observations over the years have allowed to find a total of 815 trans-Neptune objects (objects in the solar system outside Neptune). 461 of these things have not been reported before. However, this is not particularly important, because the universe is full of asteroids and other things. The rather funny thing is how they act.

What the researchers noticed is that objects often cluster in their orbits. This effect usually occurs when a larger mass changes the trajectory of these objects causing them to clump together and then travel together. however, We don’t know of anything big enough outside of Neptune in our solar system can cause it.


This is where it comes in The famous ninth planet hypothesis. The Planet Nine is a supposed planet we haven’t discovered yet Farther than Neptune but I’ve seen its potential effects. One of them is this grouping of things across Neptune. It is believed to be about 400 times farther from the Sun than Earth, and with a mass between five and ten times that of Earth.

NS This ninth planet will take about 20,000 years to complete its orbit. To put this in context, Neptune takes 165 years while the dwarf planet Pluto takes 248 years. I mean, that ninth planet would be really far from us. This is the case for the trans-Neptunian bodies, which have very eccentric and large orbits compared to the eight planets. The problem is that if this planet exists, it hides from us very well. 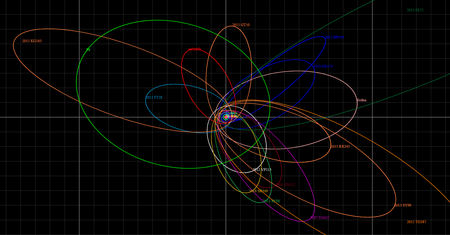 However, the ninth planet It remains and will remain a guess until it is actually found. Other options researchers are considering are, for example, a black holeIt would also have enough mass to cause this gravity. In any case, the new discoveries will allow us to continue to study and understand the edge of our solar system in order to better understand what it is and how it was formed.