1948, December, the tenth day. In the minds of those attending the Château de Chaillot, in Paris, there is still the turmoil caused by the horrors of the Second World War and the isolated attempts, by some nations, to craft a document offering guarantees to individuals before public authorities. It was December 10th and history was making, 48 countries said yes and the Universal Declaration of Human Rights was born.

Among the signatories is a geographically small country, the Caribbean island, Cuba. It is the country that made it clear on the issue of human rights, when the initial draft of the 1976 constitution wrote that “The first law of our Republic is Cubans’ worship of the full dignity of the human person.” No more words were needed, so the essence of the nation said by one of its greats, José Martí, was collected in a few areas.

In terms of rights, Cuba has a lot to show for it. The President of the Supreme People’s Court, Ruben Remigio Ferro, said that the Republic’s 2019 Constitution and the procedural reform under development place the country among the developed countries in terms of ensuring human rights, compared to the latest legislation. “Strong judicial and procedural reform in the nation based on the many laws that develop the principles and principles contained in the Magna Carta Demonstrate the leading position in human rights and guarantees‘, he confirmed.

Nelson Mandela once said that “to deprive people of their human rights is to question their humanity”, and that is why Cuban justice reform includes several laws that enhance the protection of citizens. Among them, the Code of Courts of Justice, the Code of Criminal Procedure, an Administrative Process and the Code of Procedure.

For a member of the Cuban Association of Constitutional Law, Yuri Pérez Martinez, these laws complementing the Constitution revitalize the socialist state of law. He also talks about a special term, joint responsibility, what is it? “It is a vital component from the point of view of the protection of rights in the country. The orientation of the individual with the state must be achieved, on the basis of mutual contributions.”

When referring to the socialist state of law, he said, one should speak not only of the responsibility of individuals, but also of state organs, officials and leaders. The administrative official of the National Union of Jurists of Cuba also stressed that another element to be taken into account is the differentiation of state functions “for example, The judicial function plays an important role as a guarantor of human rights, as it is established as impartial bodiesPerez Martinez warned.

One of these principles sanctioned by Magna Carta is dignity. It is clear in Article 40 that “Human dignity is the supreme value that supports the recognition and exercise of the rights and duties enshrined in the Constitution, treaties and laws.” Attorney Yuri Pérez Martinez stated that this constitutes a principle and that it should be done to the extent possible.

The rights protection model enshrined in the Cuban Constitution should be guided by Article 7, which states that the Magna Carta “is a rule of direct application,” “Judges and justices of the peace have the constitutional duty to administer justice on behalf of the people,” This can be said in a few lines, but it is a strong element in terms of rights. 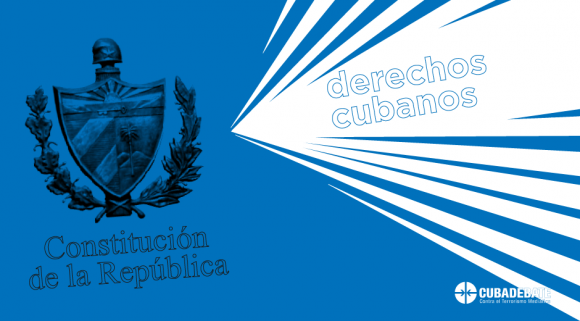 Each step of the analysis takes us back to the constitution. Referring to this issue, the President of the Cuban Constitutional Law Association, Maeda Guitt Pierre, emphasized that the Magna Carta is the protector of the rights and guarantees of the citizens of this country.

Coming to the topic of criminal procedures, he explained, they are considered the most difficult within society, and for this reason they should be “the most protective of human rights.” The Code of Criminal Procedure which will enter into force on January 1, 2022 “It is a comprehensive and important transformation, because it is not only developed for the accused, but it also protects everyone involved in a criminal process for whatever reason,” Indian.

Goitt-Pierre emphasized that the new law provides great protection for victims “The people who have been subjected to a criminal act are represented by the public prosecutor, however, when listening to citizens and granting them greater rights, it was decided to allow them to participate in the operations from the first moment.” They have the right to a lawyer, they assist in the criminal process, they can create resources, and they duly affirm their human right to protection “and this has important value for peace and conflict resolution”.

The Dalai Lama was wise when he said that “peace can only last when human rights are respected.” Similar to maintaining social peace, CPC protects against other phenomena, such as violence. In the case of a person who is a victim of domestic or gender-based violence or because of a situation of vulnerability, precautionary measures can be applied “in the event that an event of this magnitude occurs, the removal of the abuser can be used while the criminal process is in progress,” the lawyer said.

“The way this law is designed provides protection for everyone,” he said. Another important component is youth rights. An administrative official with the National Union of Jurists of Cuba commented that 16 is the age limit for criminal responsibility. However, it is suggested that defendants between the ages of 16 and 18 who are subject to criminal proceedings as defendants should have differentiated treatment. The lawyer’s curriculum “will be able to count on the accompaniment of their parents and legal representatives, the participation of specialized institutions and the opinion of alternative rulings.”

When the lawyer is asked about the reason for carrying out these procedures with the young accused, he responds briefly “There are several factors that influence them to commit a crime, which is why the Cuban state as a socialist state of law has a mission to protect these young people.” It also ruled that the human rights of this age group in Cuba were protected by the Code of Criminal Procedure.

Speaking of the accused, the law sets forth an index of rights and guarantees derived from the Constitution. Guet-Pierre noted that the right to defense has always existed, “It has now been strengthened, and persons taking part in criminal proceedings may within 24 hours of their arrest be accompanied by a lawyer of their choice able to represent them; otherwise, they can have a public defender to be present In the procedural actions to be implemented,” he explained.

Likewise, he added, freedom is also referred to as a transcendent legal asset in criminal proceedings. The Magna Carta of 2019, includes the Charter of Nepotism as a constitutional guarantee, and this is an expression of Cuban laws’ call to protect the fundamental rights that people enjoy.

He said, “Transparency is another right, which is why trials are oral, public and contradictory, so that judicial oversight can be implemented over the administration of justice.”

He stated that among the laws being developed is the Penal Implementation Law which provides insight into protecting the rights of people serving sentences because “our prisons are places where human rights are being complied with. In addition, important educational treatment and progress in compliance with sanctions are provided for inclusion in society.”

If a state’s Code of Criminal Procedure decides to protect not only those who break the law, but everyone who can participate in the process, it says a lot about protecting human rights in society.

For Professor Juan Mendoza Diaz, the country’s Code of Procedure is celebrated. An expanded party that had the germ of approving the 2019 constitution. The president of the Cuban Association of Law of Procedure of the National Union of Jurists of Cuba says without reservation: The country’s most important human rights currency is expressed in the pages of the Magna Carta. Another reason to understand the reasons for the celebration.

The bodies responsible for administering justice and those responsible for issuing laws in Cuba work every day so that the provisions of the Constitution do not remain a dead letter. In fulfillment of the principle that “the homeland is humanity”.