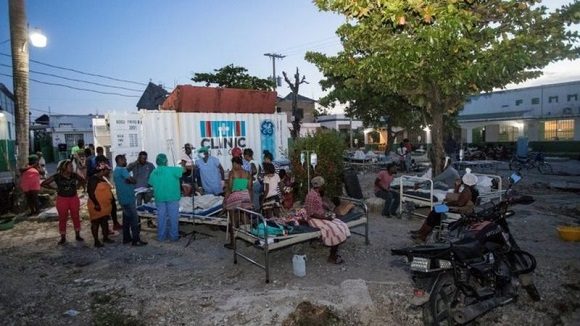 At Les Cayes Hospital they had to tend the wounded in the yard for fear that its rooms would collapse. Photo: Reuters.

Haitians residing in areas affected by 7.2 magnitude earthquake They spent the night in the open, fearing the new aftershocksThat spread since last Saturday, the situation worsened and the houses that remained standing collapsed.

This Sunday, as Tropical Storm Grace advanced through the Caribbean toward that island, rescuers advanced their search for survivors against the clock.

In the afternoon, the civil protection authorities updated the number of victims: At least 1,297 were killed, 5,700 were injured, and thousands of homes were destroyed by the earthquake, which raised fears of a strong earthquake of similar magnitude That left 300,000 people dead in 2010.

The southern region, to which Los Cayos belongs, was the hardest hit, with 160 people killed, while 100 died in Grand Anse, 42 in Niepce, and two in the northwest. Prime Minister Ariel Henry flew over three hard-hit areas on Saturday in a helicopter He declared a state of emergency in those four regions to speed up means and facilitate rescue efforts.

Henry has been in charge of government since last month, after Haiti went through another agonizing chapter of many events in recent history when President Jovenel Moise was gunned down on July 7 by a group of killers, mostly mercenaries. .

(With information from EFE and Reuters)

The new Lebanese parliament assumes its duties until 2026