The Switch has shipped 107.65 million units to date, making it the third best-selling Nintendo game console of all time.

Even five years into the market, the Switch family of consoles shows no signs of slowing down. Nintendo announced that Switch shipments (sold) totaled 107.65 million between launch in March 2017 and March 2022.

The Switch hardware range is quite diverse in terms of shipments, with the base model, only the Switch Lite portable, and the premium Switch OLED contributing significantly to the overall results. Lite and OLED sold fewer units because they were on the market for shorter periods.

As of fiscal year 22, total Switch family shipments look like this: 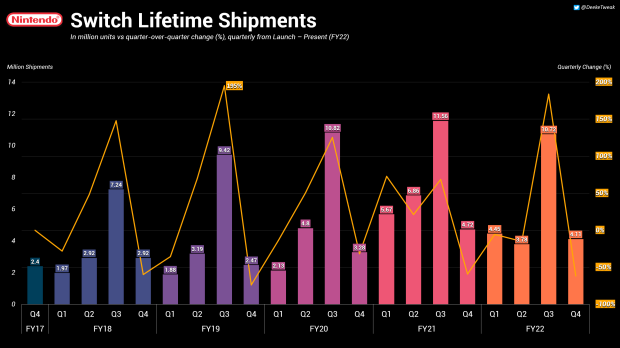 Switch shipments exceeded the Wii’s strong hardware during fiscal year 2022, and is expected to overtake the Game Boy this fiscal year (FY23).