Another 12,000 deaths from COVID-19 have been detected in the United States. Photo: AFP

Several hospitals in the southern US are reporting shortages in their oxygen supply, as COVID-19 cases and hospitalizations continue to rise.

The affected hospitals belong to Florida, South Carolina, Texas and Louisiana. According to state health officials and hospital advisors, some are at risk of having to use their backup supplies or run out of oxygen immediately.

According to Donna Cross, senior director of facilities and construction at Premier – a company that improves healthcare performance: “As cases continue to increase, there has been a growing demand for oxygen supplies and hospitals cannot keep up with those needs.”

“Normally, the oxygen tank will be 90% full and the suppliers will allow them to reach the recharge level of the remaining 30-40% in their tank, giving them a temporary stockpile of three to five days,” he said. “What is happening now is that hospitals are running out of about 10-20%, which is a day or two’s supply, before they are restocked.”

Even when refilled, Cross said, it’s only a partial supply of about 50%. It’s a very critical situation.”

Florida had the highest rate of hospitalizations in the country on Saturday, with 75 patients per 100,000 hospital residents infected with the virus, according to data from federal health officials and Johns Hopkins University.

Furthermore, the increase in deaths from COVID-19 led the Central Florida Disaster Medical Coalition, a federally funded nonprofit organization that helps prepare the health care system’s response, to purchase 14 portable mortuaries with a capacity of 12 deaths each.

This was stated by Executive Alliance Director Lynne Drody, who confirmed that the organization had met with hospitals in the region to find out their needs.

Hospitals have reported that in the past week, the largest space in the mortuary has been the top priority due to a lack of sufficient capacity, and because they have experienced delays in funeral homes transporting bodies.

Dr. Ahmed El-Haddad, an intensive care unit physician in Florida, said Saturday that he is frustrated and “sick of seeing people die and suffer because they haven’t been vaccinated.”

“This time we see younger patients (30, 40, 50 years old) suffering. They are starving for oxygen and dying. Unfortunately, this time they are dying faster,” he said.

“What’s happening now is completely predictable, but completely preventable. And you know we have the means with vaccines to reverse this,” said Fauci, director of the National Institute of Allergy and Infectious Diseases.

Nationwide, 52.1% of the entire population had been vaccinated as of Saturday, according to data from the Centers for Disease Control. 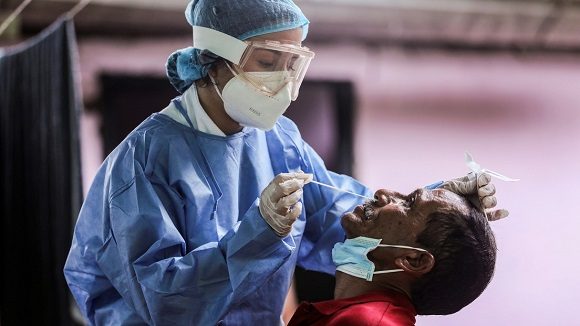 The World Health Organization (WHO) stated that it is being analyzed A new type of coronavirus, christened Mu or B.1.621, and it was first identified in Colombia.

See also  And the World Health Organization warns that the epidemic "will last for a year longer than it should", because poor countries are not immunized

In its weekly epidemiological bulletin on the epidemic, the World Health Organization said Mo, which is classified as a “variant of interest”, has a group of mutations that “indicate potential immune escape properties”.

He notes, “Preliminary data show a decrease in virus neutralization ability in both vaccinated and vaccinated patients, similar to what happened with the beta variant, but this needs to be confirmed by additional studies.”

According to a report by RT in Spanish, organization rates A form of the virus as “significant” when it has risk factors that could make it more contagious or resistant to a vaccine. Next, in-depth studies are done to determine if they are more aggressive or transmissible. If so, it is classified as a ‘variable of concern’.

High prevalence in Colombia and Ecuador

Since it was first identified in Colombia, in January 2021, according to the agency, there have been sporadic reports of mu variant cases and some large outbreaks in countries in South America and Europe.

“Although the global prevalence of the mu variant among serial cases has decreased and is currently less than 0.1%, its prevalence in Colombia (39%) and Ecuador (13%) has steadily increased,” WHO noted.

especially, As of August 29, the variant has been detected in more than 4,500 genome sequences from 39 countries that have been uploaded to GISAIDand the SARS-CoV-2 mutation screening database.

The World Health Organization has decided to assign the variants of concern and interest to the letters of the Greek alphabet to avoid linking virus strains to specific countries.

In this way, it has already categorized four ‘anxiety’ variables – alpha, beta, gamma and delta – while there are now five ‘attention’ variables – eta, lotta, kappa, lambda and mu.

(with information from agencies)