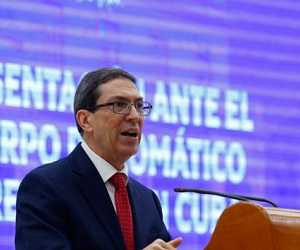 Cuban Foreign Minister Bruno Rodriguez held a meeting with Chilean President Gabriel Borek, who officially took office on Friday during a ceremony held at the headquarters of the National Congress.

Rodriguez confirmed, via a Twitter message, that it is my pleasure to greet Borek and to convey congratulations on behalf of President Miguel Diaz-Canel.

He added in his message that he reiterated in the meeting his sincere wishes for success in managing the next government and expressed his desire to deepen bilateral relations.

It was a pleasure to greet the President of Chile Tweet embed And convey congratulations on behalf of the President Tweet embed. I reiterated our sincere wishes for success and expressed my desire to deepen bilateral relations.

On Friday, the Cuban Minister of Foreign Affairs held a meeting with the Minister of Interior and Public Security, Izekia Sechesa, who wished him success in his term, and renewed his congratulations to President Borek.

Rodriguez headed the Cuban delegation that attended today the mandate transfer ceremony that included the swearing-in of members of the new government team, with a strong female presence.

During his stay in Chile, the Cuban foreign minister met on Thursday with Maria Begonia Yarza, the designated health minister, with whom he shared the Caribbean country’s experiences in the field of health.

The island diplomat also met with Chile’s Minister of Science, Technology, Knowledge and Innovation, Flavio Andres Salazar, at a meeting in which both parties expressed their common interest in expanding cooperation ties in line with shared potential.

See also  Usually and without much inconvenience: This is how Venezuela's election day passes

On that day, the Cuban Foreign Minister also held a meeting with Antonia Origola, who will direct the foreign policy of the South American nation in the new government, and to which he assured the desire to deepen bilateral relations and cooperation between the two countries. .

Upon his arrival in Chilean territory, the Cuban head of foreign relations reaffirmed the goal of promoting the development of historical relations that unite the two peoples.

This was confirmed in December last year when Cuban President Miguel Diaz-Canel congratulated newly elected Gabriel Borek on Twitter, an event he described as a historic popular victory.

We endorse the will to expand bilateral relations and cooperation between the two peoples and governments, the Cuban president said on the social network at the time.

(with information from PL)