A team of NASA-funded lunar scientists, led by UCLA planetary researchers, think they’ve discovered the warmest places on the moon: shaded places inside trenches that always hover around a comfortable 17°C.

The trenches, found using data from NASA’s Lunar Reconnaissance Orbiter (LRO) spacecraft and computer models, will make base camps safer and thermally stable for lunar exploration and long-term habitability compared to the rest of the lunar surface, which heats up to 127 degrees Celsius during the day – Which lasts about 15 Earth days – and drops to -173 degrees Celsius at night.

In addition to temperature, these 200 underground sanctuaries can protect astronauts from the dangers of solar winds, micrometeoroids, and cosmic rays. Some of these craters can lead to caves that are just as warm.

“Surviving the lunar night is very difficult because it requires a lot of energy, but being in these craters and caves almost completely eliminates this requirement,” he said. life Tyler Horvath, a PhD student in planetary sciences at the University of California, led the new research, Recently published in the magazine Geophysical Research Letters.

Horvath processed data from the Diviner – a thermal camera – to see if the temperature inside the craters differed from that at the surface. The team believes that the drooping shade is responsible for the stable temperature, limiting the heat produced during the day and preventing heat radiation at night.

A good place to base? Scientists speculate that some lunar trenches give rise to lava tubes like the ones seen here at Hawaii Volcanoes National Park. The moon has similar tunnels, left by molten lava flows below the surface.

The investigation focused on a cylindrical depression roughly 100 meters deep, about the length and width of a football field, in a region on the moon known as Mare Tranquillitatis.

Lunar craters, or lava tubes, were discovered in 2009 by Lunar Reconnaissance Obiter and Japan’s Kaguya spacecraft, and since then, scientists have wondered whether they lead to caves that could be explored or used as shelters.

Horvath revealed that about 16 of the more than 200 craters may have been collapsed lava tubes. As mentioned universe todayThey are created when the top of a stream of molten rock solidifies and the lava inside drains away, leaving a hollow tube of rock.

Two of the more prominent craters have visible protrusions that clearly lead to some sort of cavern or void, and there are strong indications that another ledge may also lead to a large cavern.

People will return to the caves

“Moon craters are a remarkable feature of the lunar surface,” LRO Project Scientist Noah Petro said, From NASA’s Goddard Space Flight Center in Greenbelt, Maryland. “Knowing that they create a stable thermal environment helps us paint a picture of these unique lunar features and the potential for them to be explored one day,” he added.

“Humans evolved while living in caves, and we may go back to caves when we live on the moon,” said David Page, one of the authors of the research paper who runs the Diviner Lunar Radiometer experiment aboard the LRO that took temperature measurements. study. 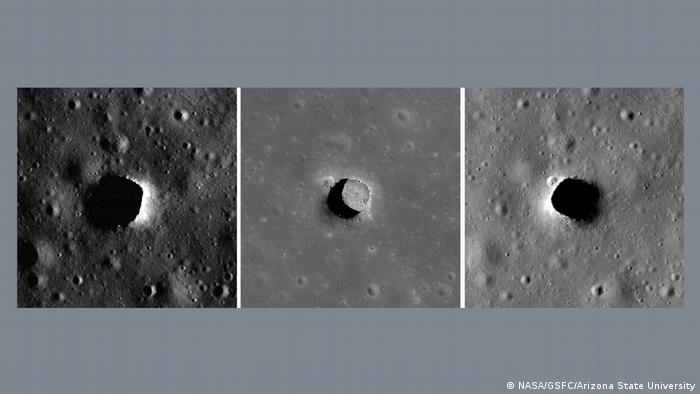 NASA’s Lunar Reconnaissance Orbiter Camera took pictures of the Marius Hills Trench three times, each time in completely different lighting. The central panel, with the sun above it, gives scholars a great view of the trench floor of the Marius Hills. Marius crater is about 34 meters deep and 65 by 90 meters wide.

The Challenge in Mare Tranquillitatis

Despite promises that these craters will be a home or research station, according to scientists, there is still another challenge to be solved. If this particular pit is used for this purpose, there is likely to be a heat problem inside the pit. The part of the floor of the trench exposed to the sun and not protected by the cantilever reaches daytime temperatures of about 150 degrees Celsius, which is hotter than the surface of the Moon.

“Because the Tranquilites Trench is closest to the lunar equator, the sunlit Earth at noon is probably the hottest place on the entire surface of the Moon,” Horvath said.

However, researchers believe that by inventing heating and cooling equipment, this problem can be solved. In addition, they say, building bases in the shaded parts of these craters allows scientists to focus on other challenges, such as growing food, providing oxygen for astronauts, obtaining resources for experiments, and scaling up.

In a new trailer, FIFA 23 shows its updates to the match experience