Bertram Meyer, Bishop of Augsburg, met Pope Francis at the Vatican over the weekend. After the meeting, Mayer told the Catholic News Agency that he doesn’t think the 85-year-old head of the Catholic Church is “sick of the job”. “I was very strong, both physically and mentally,” he said. However, there has been speculation for some time about the true health status of the Supreme Pontiff.

A year ago, on July 4, 2021, local journalists were shocked to learn that Francisco had suddenly undergone colon surgery. Until that day, the Pope prayed from the window of the Apostolic Palace with thousands of Catholics in St. Peter’s Square, as is customary every Sunday. Hours later, the director of the Vatican’s press office, Matteo Bruni, via tweet, stated that the “operation” was “planned” and that the Pope had reacted well.

Eleven days later, Francis returned to the Vatican. But about two months later, he made it clear that the bowel operation was apparently more dangerous than he initially thought. “A nurse saved my life,” the Argentine told a Spanish broadcaster.

One of the oldest popes

For two months, the world knew the image of the Pope in a wheelchair. Constant discomfort in the knee will be the cause. Francisco explained that doctors prevented him from standing or walking for a long time.

Since taking office, Francis, who is statistically one of the 10 oldest popes in the history of the Catholic Church, has been famous for his anomalous appearance. At large Vatican conferences, he was often seen walking into the venue, bag in hand. But over the years, his gait has changed. Something that is also part of aging. Now, with pictures in a wheelchair, they talk about his health again.

Francis had intended to travel to Lebanon in June, but due to his knee, the visit was officially postponed. He also had a pending trip to South Sudan and Congo this week. For years, he wanted to make this trip, with the head of the Anglican Church, to visit the poorest regions of Africa.

The hot Roman summer will now be quieter for the Pope. As usual, in July there are no large general masses of believers. Francisco’s public appearances are becoming increasingly rare. However, on Friday he met not only with Bishop Meyer from Augsburg, but also with businessman Elon Musk, one of the richest people in the world. “It’s a great honor to meet the Pope yesterday,” Musk, who attended the Vatican with his four children, wrote on Twitter. 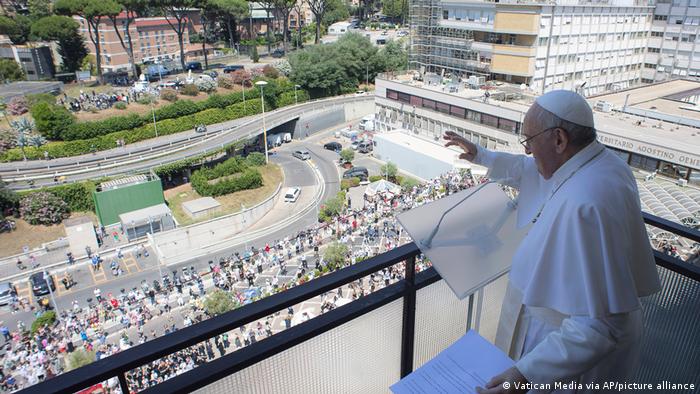 Francis blesses his followers from the hospital on July 11, 2021.

Appointment of new cardinals in Rome

In a few months, Francis will be in office longer than his predecessor, Pope Benedict. On August 27, on an unusual date, he will accept 20 new clergymen into the so-called College of Cardinals; 16 of the new cardinals were not yet 80 years old, so in the event of a secret meeting, they would be able to help choose Francis’ successor. On August 29 and 30, the Pope summoned all the cardinals of the world to the Vatican for consultation. The topic, as usual, is the reform of Korea.

In March 2023, the Supreme Pontiff will celebrate ten years in office. And despite the fact that the Vatican has rejected a possible resignation, it has been speculated for some time that Francis may announce at the end of August that he will leave office next year. But Francisco himself denied all those rumors on Monday. ‘It never crossed my mind’, told Reuters. He added, “At the moment, no, at the moment, no. Really.”

This robot can lift objects and build structures without any contact

Water eruption and its consequences for climate change